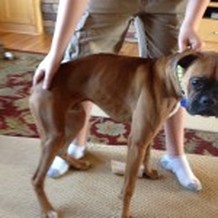 After adopting Gus from a boxer rescue group, I assumed his emaciated appearance and constant diarrhea were simply from lack of nutrition and veterinary care. I spent hundreds of dollars on tests, anti-diarrhea and antibiotics. With nothing coming up on stool and blood tests, my vet basically said he didn't know to diagnose this issue. We became increasingly frustrated as Gus became more ill and began having frequent explosive accidents in our home. Gus was prescribed more antibiotics with the vet stating the next battery of tests were about to get “really expensive”. I suggested natural food and was informed that I would be risking his nutrition if I did so!! After refusing more meds, I Immediately consulted Dr. Levy and was told to start with a dietary change. Within 36 hours Gus’ diarrhea was gone–for good. 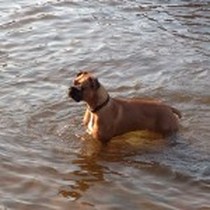 Gus began a steady weight gain of 1.5 pounds per week! Although he is a very petite boy, he went from 23 lbs to tipping the scales at just over 50 lbs! He has never taken another medication. The holistic approach to his care was truly a lifesaver for this sweet little boxer. 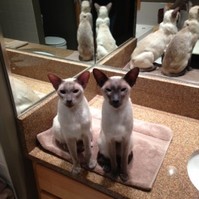 Jake and Ellie are two 7 year old Siamese cats. Ellie had issues with constipation, and Jake had a chronic upper respiratory condition that sapped his energy and appetite, and made him lethargic and dull. He had been on antibiotics and other medications for years. 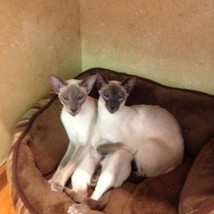 With supplements and homeopathic treatment, Jake was able to stop his medication. He has a much easier time breathing, plays with his sister, and eats all his food. Ellie isn't constipated any more. 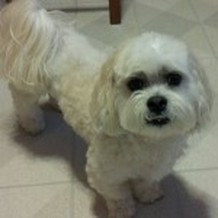 Kodi is a handsome little Shih Tzu mix who is being treated for allergies. He is doing much better, and he no longer bites his feet or scratches himself uncontrollably. 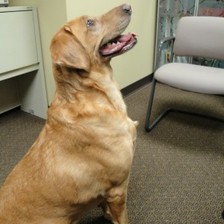 After my childhood dog died of liver cancer when she was only eight years old, I was heartbroken and determined not to let that happen to another dog I owned. Now, as an adult with my own dog, I sought out the advice of Dr. Levy for a raw food diet and assistance taking care of my dog’s allergies. I had my reservations about holistic medicine however, after Layla had taken the remedy Dr. Levy prescribed, she improved leaps and bounds within a few weeks. Layla is no longer on prednisone or any pharmaceutical drugs for her allergies, her itching has gone to a minimum, her shedding has dramatically decreased, her ears are clean and have little to no dark smelly discharge, and her overall demeanor is calmer. I was also extremely impressed with how patient, respectful, calming and understanding Dr. Levy was with Layla. Dr. Levy is extremely knowledgeable in animal behavior, nutrition, and the remedies she puts together. I have learned a lot from her and I learned that some seemingly normal dog behavior (excessive shedding, nervousness, seasonal allergies being treated with harsh drugs (and the side effects of those drugs), constant scratching, visiting the vet for things such as anal gland release, etc. does not need to be normal for my dog and can be solved easily with nutrition/holistic remedy. Dr. Levy’s actual clinic itself feels like you’re sitting in a living room and Layla actually loves to go to the vet :-) I highly recommend Dr. Levy and I am now a believer in holistic healing and a raw diet. 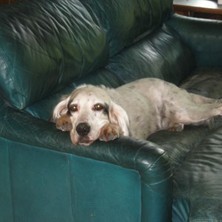 It’s been a while since I wrote to you so my mom told me I should let you know how wonderful I’m doing. Plus, she needs to come get some more green jar supplement and Aconite someday soon. But first I have to tell you again how much I LOVE YOU!  Ever since I met you my life has just gotten better and better!  I can sit again (my family always told me what great posture I have).  My limp is SO much less – I can sort of gallop outside when I want to!  Before it snowed I actually played out in the woods and tried to help Dot hunting chipmunks!

And I've started humping Sammy again!!!  She’s my 4-year old lab sister and we kind of taught that to each other when she was a little puppy.  She humps me when she gets really happy to see me.  Mom tries to yell at her to stop because she always smashes me to the floor.  But I don’t mind enough to say anything.  But it’s better if I’m already laying down.  But Mom was SO PROUD when she saw me humping Sammy again!!  So I really love you.  And the other thing I haven’t done in ages and I've started again is STANDING ON MY BACK LEGS and putting my paws up in Mom’s lap!!!!!  I cant do it for very long, of course, and I only do it when I’m begging but it ALWAYS works because she’s so happy to see me do it again!

And we ALL love our food!  We each got a can of sardines in our Christmas stockings.  I wish Santa had put a big glob of beef liver in mine because I think that’s my favorite.   Mom stocks up on bags of frozen vegetables when they’re cheap.   And she bought a WHOLE TURKEY just for us!!!!  we ate absolutely every bit of it!  And everybody thinks we have all slimmed down a bit, too. So.  Happy New Year to you and I don’t know when I’ll get to see you again.  But I’m getting really low on my Aconite remedy (plus it’s looking pretty cloudy) and I’m almost out of my supplement in the green jar.  Could Mom come pick up refills next week sometime?

THANK YOU so much for everything you've done for me … and for our whole family.  I’m actually having fun being old now, because Mom is such a sucker every time she sees me doing something young again! 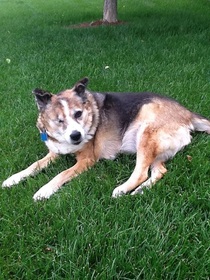 My second most favorite person in the whole world is Dr Jess, cause you know my mom has to be the first :-)!          Dr Jess gives the best body rubs ever and always gives me treats - hey at 16 1/2 I need a little extra TLC - Dr Jess has helped me feel so much better in the past three years and I am very thankful for the extra quality time I've have had with my mom.  At 13 years old I was feeling pretty awful - I hurt all the time and life was not much fun anymore - but since then Dr Jess and my mom have changed my diet to raw (which I love love love), taken me off horrid drugs that only made me feel worse; treated some issues that were never diagnosed previously, helped me feel so much better using holistic remedies; now I have the spring back in my step - my most favorite thing to do is lay in the green grass and sniff the air - going for strolls in the neighborhood, visiting Dr Jess for body and chiropractic work and or course dinner time!  Thank you Dr Jess for all you have done for me, you're the very best!
POSEY

Posey is a Cornish Rex kitten who became very ill after a set of vaccines. She was already on a raw food diet. She was eventually diagnosed with FIP and sent home to die. With intensive homeopathic treatment and a knowledgeable and dedicated caretaker, she is now back to normal and has grown into a beautiful young cat. 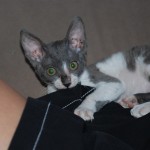 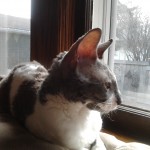 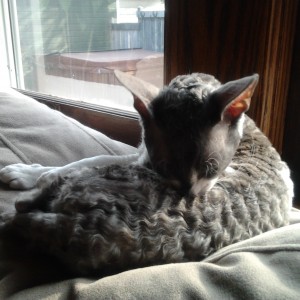 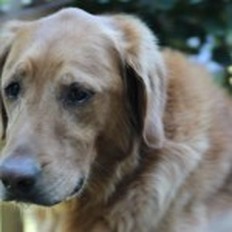 Sammy is an 8 year old Golden Retriever. I first treated Sammy years ago for allergies. With the help of a raw diet, supplements, and homeopathic remedies, Sammy’s allergies completely cleared up. At that time I was still using vaccines in my practice. After 1 1/2 years of treatment he was seriously overdue for his vaccines, so I gave them. Within a couple of months we were back to square one, and now it has been several years since Sammy was vaccinated, he is once again doing well, and he will never get vaccinated again. 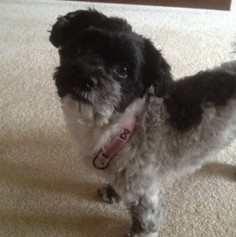 Sasha is a 6 year old Havanese who came in a year and a half ago with bladder stones. She had to have surgery to have them removed, and since then we have focused on improving Sasha’s health with diet and homeopathic remedies so that she will not have these problems again! 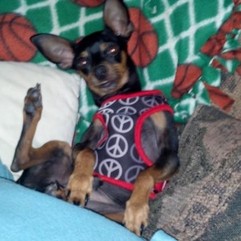 Tito is a four year old Miniature Pinscher. He was diagnosed with a liver shunt this spring. With a homemade diet, supplements, and homeopathic remedies, Tito stopped vomiting, regained his energy, and his Wobbler’s disease (cervical vertebral malformation) symptoms are improving as well!

An update for Tito (April 2017):
I'd like to update my testimonial to say that Tito will be 9 in May 13th. Since seeing Dr. Jess at age 4 for Liver Shunt issues and being given a death sentence from traditional vet saying "there's nothing we can do for him, take him home and keep him comfortable and bring him back when it's time to put him to sleep" He has been on a raw diet ever since. With the change in diet and various holistic remedies he is a happy, health and loving member of our family and we owe it all to Dr. Jess. Thanks you! Thank you! Thank you. You've made a holistic and raw diet believer out of Tito and his mom! 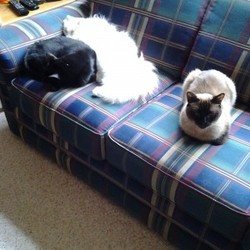 Zeb is the Siamese in the picture. He is 9 years old, and had been on Phenobarbital for many years. He was vaccinated as a young cat, when he was neutered, and one year later had his first seizure. He has not had seizures in many years. With the help of homeopathic remedies we were able to wean Zeb off the medication. He is not on Phenobarbital any more and is doing well. 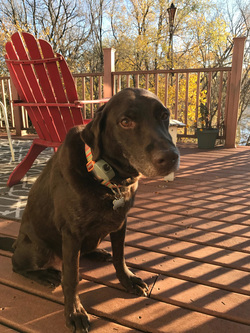 Herschel was diagnosed with inflammatory bowel disease and SIBO. When I first saw him, he was emaciated and looked twice his age. Now he is off all medications and back to his normal weight and energy level.

Herschel's owner says: "Herschel is doing wonderful. He has gained his weight back and is very active. He still needs to gain some muscle in his back legs, they are a little weak but besides that he is all better. He is also on no medication! Thank you for saving my wonderful dog!"
​